Are top Irish bosses taking a massive pay cut or is it just tokenism at the top?

Are top Irish bosses taking a massive pay cut or is it just tokenism at the top?

High-profile bosses have been keen to show the way as Covid bites, but do the ‘sacrifices’ tell the real story? 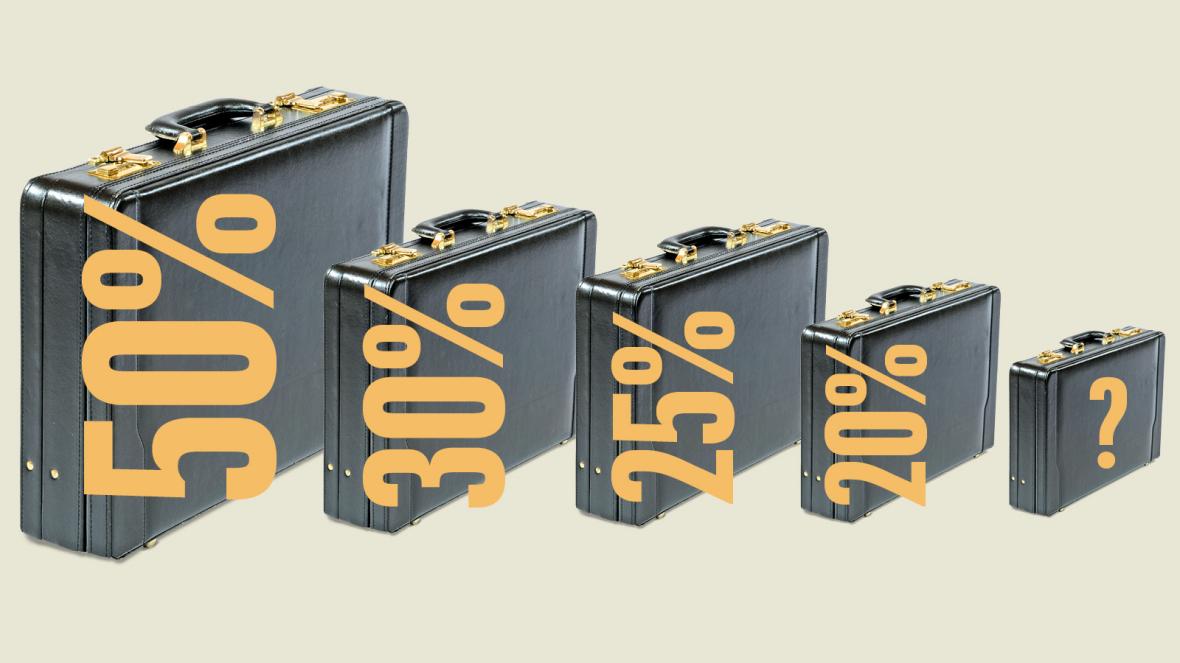 As the economic crisis spawned by Covid-19 continues to unfold, bosses who claim “we’re all in this together” will be expected to put their money where their mouth is.

Executive pay is likely to face increased scrutiny in the months ahead as investors and other stakeholders look to ensure that senior managers share the financial burden created by the pandemic. Some bosses have exited the traps early, volunteering to take either full or partial salary cuts this year.

A review by The Sunday Times of company announcements published since March by 46 Dublin-listed firms found that 13 have provided updates to investors regarding cuts or changes to executive salaries and bonuses to preserve cash in light of Covid-19.

Ryanair group chief executive, Michael O’Leary, has halved his base pay to €250,000 until the end of the airline’s financial year in March 2021. Last year, the aviation boss’s salary was topped up by a €458,000 bonus. Share options increased the total value of the package to €3.5m.

The filling station group Applegreen implemented a 20% cut to base salaries for executives in April, initially for a three-month period. Despite trading ahead of Covid forecasts, those cuts have continued on a rolling basis. Last year, chief executive Bob Etchingham received a base salary of €380,000 and a bonus worth €146,000.

Building materials company CRH cut management salaries and board fees by 25% for an indefinite period in April. Chief executive Albert Manifold was paid a salary of €1.5m in 2019.

In some instances, salaries were cut in the early stages of Covid-19 but have since been restored. For example, bakery group Aryzta implemented a three-month, 30% salary reduction for executives and board members starting in April, which coincided with a 15% salary reduction for the wider leadership team. Salaries have since been reinstated. Boss Kevin Toland’s pay package totalled €4.5m last year, including a €961,000 base salary.

Other firms introduced salary reductions, but did not make formal disclosures to the market. For example, Kingspan reportedly halved executive salaries in April and May to coincide with a 40% company-wide pay cut. Chief Gene Murtagh received salary and fees worth €870,000 in 2019. His total pay package amounted to €1.98m.

Similarly, food company Kerry Group did not make a public announcement but implemented a 25% executive pay cut for three months from March, according to a spokesman. Company boss Edmond Scanlon’s base salary was €1.2m in 2019 with a total package worth €3.9m including bonuses, pension contributions and incentives.

Dalata, the country’s largest hotel group, has reduced pay for senior executives on a rolling basis since March, but it has not yet disclosed the details. Boss Pat McCann received a base salary of €610,200 in 2019. Bonuses and long-term incentives were worth €1.03m.

Some outfits have opted to defer fees and salaries. For example, executive directors at venture capital firm Draper Esprit opted to defer 20% of their salaries for a three-month period starting in May, according to the company’s annual report published in June. The deferred pay will be used to purchase shares in the company. Chief executive Martin Davis will receive a base salary of £420,000 (€466,000) in the current financial year ending March 2021.

It is likely that cuts to executive pay will continue as the Covid-19 crisis evolves, according to Ger McDonough, a partner at professional services firm PwC’s people and organisation unit. He said remuneration committees will have to consider how pay and incentives will be tweaked to reflect the ongoing pandemic. “If business performance is significantly and adversely impacted by Covid-19, which is outside of the executive team’s control, what is a fair and reasonable incentive outcome for employees, executives and owners of the business?” he asked. “While there is no easy answer, ensuring [companies] engage with [their] employees will be critical so that they have an understanding of the situation and the decisions made.”

Trayc Keevans, a director at specialist recruitment consultancy Morgan McKinley, said several client companies have introduced “significant pay cuts” at executive level, a trend she expects to continue into the fourth quarter as senior managers learn more about the virus’s longer-term impacts. “[Clients are] certainly not losing the run of themselves and keeping a more prudent approach in line with what is happening in the marketplace,” she said.

Keevans said that companies with greater transparency around pay stand to benefit from staff loyalty. “In the absence of that transparency, there’s a lot of chatter about who’s getting what. That’s where discontent can set in,” she said.

It is a view shared by Stafford Bagot, who leads the Irish office of executive search firm Heidrick & Struggles. He said that many large firms are “being realistic on salaries” and recognise the need to be seen sharing the load if their sector is particularly exposed to Covid-19.

“We’ve had some instances where, at the beginning of talks and negotiations, the salary was X and by the time the offer came out, there was a 20% reduction and we still convinced the person to join that company. These are extraordinary times. I’ve never seen that before,” he said.

Some commentators say it remains to be seen whether pay cuts for senior management will bear fruit. Niamh Brennan, a professor of management at University College Dublin, said an academic study she oversaw of 428 profit warnings from public companies listed in London found frequent use of the phrase “salary sacrifice”. Brennan said that, in some instances, the term could prove meaningless given that base salary is just one element of executive pay.

“I came across a company that in compensation for taking the salary sacrifice, executives were paid stock options. Those stock options would have been priced very low because markets were down,” she said. “[They] possibly will turn out to be worth a lot more than the ‘salary sacrifice’.”

Brennan also warned about the emerging practice of companies measuring performance based on earnings before interest, tax, depreciation, amortisation and the coronavirus, or ebitdac, a variation of the commonly used ebitda metric.

“It’s earnings before the bad stuff, including any bad stuff related to Covid,” she said. “I find it puzzling that management uses an earnings number that excludes a lot of the bad stuff.”

Kevin Sludds, a professor of ethics, shared Brennan’s concerns that salary cuts may be seen as “tokenism at the top” if senior executives have other financial incentives to fall back on. This may “undermine the sense of solidarity” with employees.

Sludds suggested that executive pay cuts ought to be validated by carrying out an ethics review, a five-stage process where a qualified ethicist examines whether a company’s actions genuinely reflect its public statements and values.

He said companies that can prove that they are behaving ethically have a better record of attracting and retaining staff and customers and have a better relationship with investors and regulators.

Laura Bambrick, social policy officer at the Irish Congress of Trade Unions (Ictu), said Covid-19 has highlighted a need for greater scrutiny of C-suite pay, particularly given the fact that executives are generally compensated through a combination of basic salaries, bonuses, long-term incentive plans, pensions and benefit-in-kind.

Bambrick added that the need for further examination of top-tier pay stretches beyond PLCs. “Publicly listed companies are required by stock market rules to publish certain information, including pay of their management team. Private companies are under no such obligation and their executives’ pay remains shrouded in secrecy,” she said.

“There is nothing to prevent the new government making such reporting a requirement of firms tendering for public contracts.”

Kevin Toland
Aryzta’s chief executive took a 30% salary cut in April for three months. Last year, Toland’s base salary was€961,000 in a package worth €4.5m

Albert Manifold
The chief executive of CRH has taken a 25% salary reduction for an indefinite time. He received a salary of €1.5m in 2019

By Conor McMahon, The Sunday Times

ethical performance is a competitive advantage

We use cookies to ensure that we give you the best experience on our website. If you continue to use this site we will assume that you are happy with it.Ok